Shopping for lining fabric last weekend did not work out.  The line up to get into the store was insane and I didn't have the luxury of time. 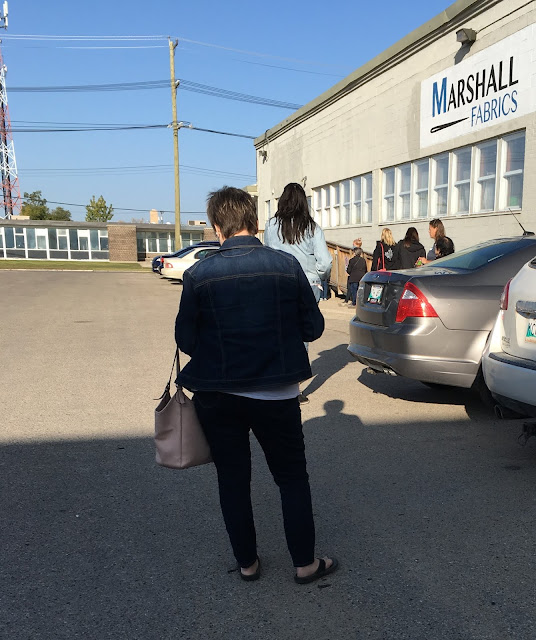 I still do not have the luxury of time but this weekend I did manage to get up extra early and make it there before the store opened.  Others had the same thought and even though I was not the first in line this morning, I was part of the first batch of shoppers let into the store.

I did foolishly think that this would be a quick in, pick out lining fabric, and get outta there, sort of errand.  Boy, was I wrong!  The line-up inside the store to get fabric measured and cut was a way longer wait than the pre-opening outdoor line-up. 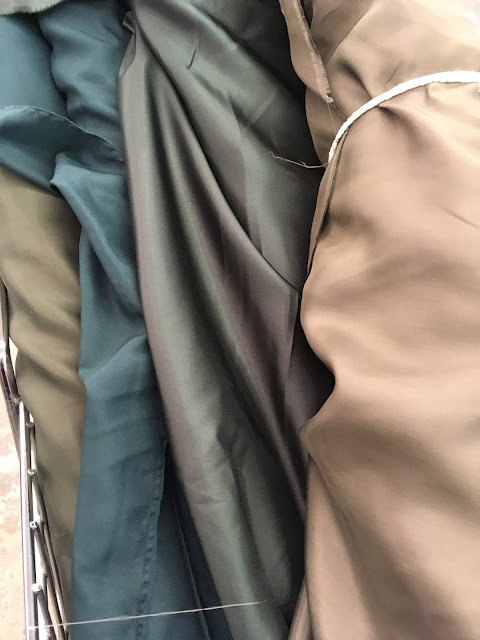 It was all worth it in the end.  I found a selection of lining fabrics on sale for $1.00 to $2.00 / metre.  I still can't believe it.  I loaded up the shopping cart with all of the green shades I could pull, hoping that one of the rolls would have at least 11 metres on them.  And thanks to God, it happened the one bolt that I hoped and prayed would have enough yardage did.  I will admit that there was a bit of excitement with finding the lining fabric at a bargain price when everything else has been going up ridiculous amounts.

One hurdle done, now to find the time and place (I need several large folding tables pulled together.  It's that big of a project.) to have this cut out before I can get this sewn.  Maybe next weekend.

Be Safe and Happy Sewing!

A couple of months ago I made a toile for a costume cloak, Butterick 4377.  And until recently, the project has been on hold while waiting for the fabric.
Right now it's in the trunk of my car waiting for a time and place to lay out this project and get all the pieces cut out. In the meantime, I'm trying not to be concerned about the fabric that was chosen to line this project.
Can you guess what type of fabric was sold to the individual instead of lining fabric?
Drapery sheer fabric.  For the lining. 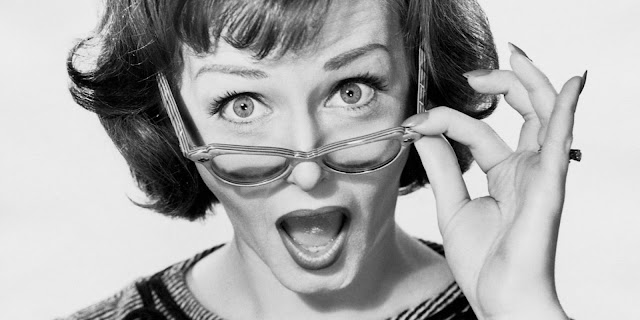 What. The. Fudge.
It's not like lining fabric is scarce. I just want to know who in the fabric store told the person picking out lining fabric that this was an appropriate choice?
That salesperson needs to be fired spoken to and educated.
This is why I don't like sewing for others.  Bad fabric choices can ruin a project.
It's like shopping for clothes.  Never trust the sales person.  They're there to make a sale.  Period.
This past week this project has been stressing me out before I get knee deep into it. Let alone get it cut out.
I've been thinking that I'll have to sew French seams since it won't look good if you can see serged edges. The thought of sewing French seams with drapery sheer fabric on such a large project has me wanting to give up sewing. Okay, maybe not that far. Maybe more like throw me into a deep spell of procrastination.  The more I research sewing this type of fabric the more it has me stressed out.
And it's not a project that I can, nor want to, turn down.
So I'm planning on going shopping for lining fabric, proper lining fabric.  Yup, I'm breaking my fabric fast.  I'm doing it to save my sanity.
Hopefully, I can find a suitable colour and get this project done.  In the meantime, I think I will sleep better tonight knowing that the drapery sheer nightmares are behind me.
Happy Sewing!
at September 11, 2020 No comments:

I'm a little late with trying out this pattern. Butterick 6244 was released in 2015, the following year it was voted "Best Pattern of 2016" over at Pattern Review. Oh, and there are over fifty reviews on the site for this little number. 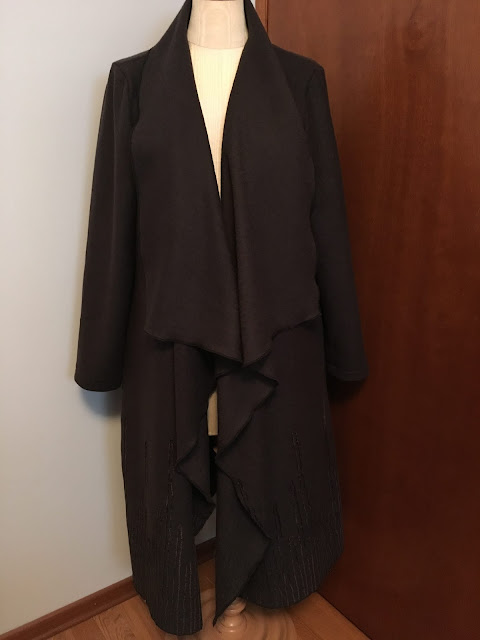 I have to agree this draped front coat is a pretty sweet pattern. It's almost a perfect pattern. It's missing pockets which was easily corrected by borrowing the side pocket pattern from another coat pattern  (out-of-print Vogue 8934). 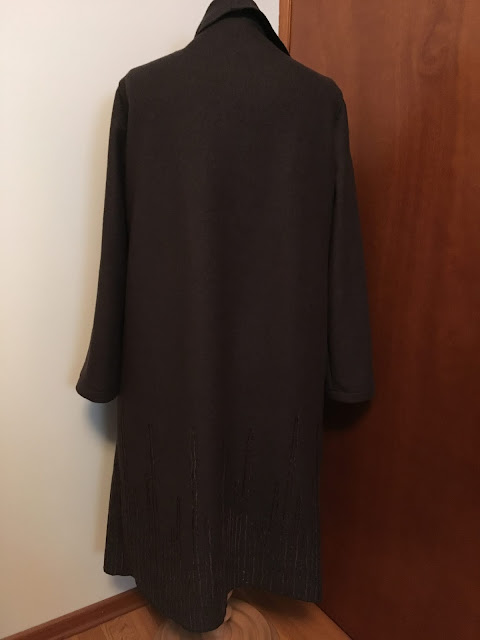 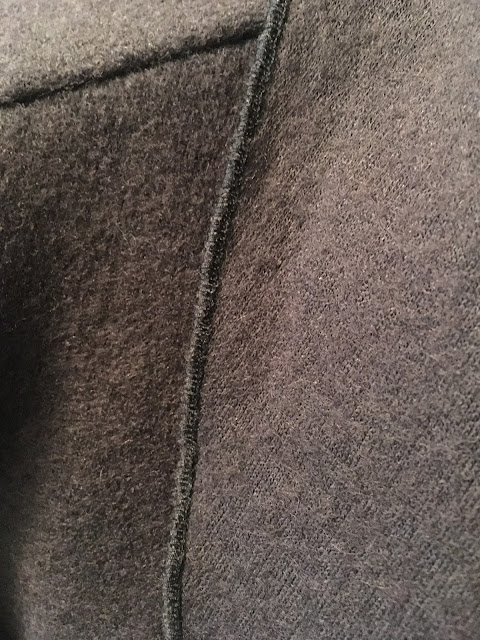 The serger was utilized for the rolled hemming feature instead of the 5/8" narrow hem suggested in the pattern instructions. I really like how it turned out.

The fabric is a boiled wool that has been in the stash for many moons. It might look familiar. I used this fabric a few years ago for this project. I actually picked this fabric to test out the pattern and even though I want to revisit this coat pattern in another wool fabric I actually think I will wear this toile often. It makes me happy when this turns out this way.

Seam Finish:  Interior seams are serged, back collar is finished with a flat felled seam and the hem is finished on the serger.

Tips:  Experiment with different seam finish options before settling on the suggested finish in the pattern.

This is one of the fabric prints snatched up by mask makers that recently sold out at a local fabric store. It was an interesting article, despite the error about when they mandated face masks in store.  Fabricland mandated face masks since they were able to re-open in early May, Marshalls only started on July 23, after our province saw a spike in Covid cases at communal living colonies. A fact that the journalist could have easily fact-checked via their Instagram account.

At Fabricland, an unofficial survey of those lined up to get their cotton picks cut, hockey themed prints were the face mask print of choice. Many waiting for the NHL licensed print bolt of fabrics to be passed down the line.

There certainly has been a spike in mask making since the provincial government mandated face masks in schools twenty days before the return of students.  Before then it was only "recommended" for students in the higher grades to wear masks. In the same time frame many other businesses and public areas are starting to "mandate" the use of face masks and homeless and out-reach centres are calling for donations of the same.

All of the sudden, in the last weeks of summer, sewing masks has replaced pandemic baking.

I'm avoiding the fabric store line-ups like the plague. Once inside the stores, many are not social distancing. It is as if folks believe their home-made and store bought face masks provide them with some superpower or makes them invincible. While many still have not embraced this year's must-have fashion accessory.

So I will be spending the final long weekend of the summer at my sewing table sewcial distancing away from the crowds getting ready for the return to in-class learning.

I won't be sewing masks. Not this weekend.

Instead, there is a chill in the air and this has me thinking about other sewing priorities.

On that note, stay safe, enjoy the long weekend. 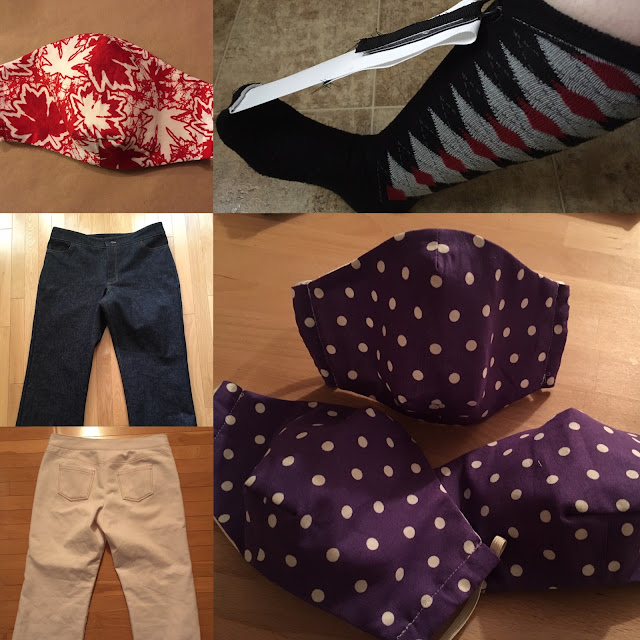 As seen in the collage, my creativity is still on hiatus. I wish I could say that I spent my time doing something fun. I can not. What little time I did spend sewing was none-the-less enjoyable and practical. And I'm pleased that I can finally cross sewing jeans off the sewing bucket list.

This month the following was stash-busted:

Now that I finally found an appropriate sized box, I need to pack these up, head to the post office and get these shipped.  It's another batch of scrub caps that I've been sitting on for way too long.
This project kept my hands busy and provided a sense of helping out during the pandemic even though this has been in a very small way.  It has also been a great way to use up some fabric scraps.
The solid yellow cotton and yellow floral silk/cotton print (shown at the bottom) were remnants from slip projects.  The blue and white Japanese cotton and pink lightweight linen scrub caps were made from new yardage.  The red polka dot cotton fabric was left over from little girl dresses.  The blue chambray scrub cap was made with left-over fabric from a Dad and little boy set of shirts.  The blue bird cotton print fabric was left over from a dress.  The blue bee printed cotton was a quilting cotton picked up with the thought of making microwave cozies.  They are going to some hard working nurses at a long-term care home who were working during the kpandemic.  I hope these provide a sense of appreciation for all that they do for the people they're caring for during this time.
I'm going to move onto sewing face masks.  There has been a call from local homeless shelters for these and there is still small pieces of cotton fabrics that I can use for this project.  I'm going to try another pattern though.
In other sewing news, my version of the Strassburg Sock works. It's not my fanciest sewing but it is one of my projects that I'm most proud of, go figure.
This week I was shocked by a Alexander McQueen jacket with Melania's not so subtle attempt to highlight her husband's "law and order" rhetoric. There was something so very ominous about the outfit choice for a political speech. 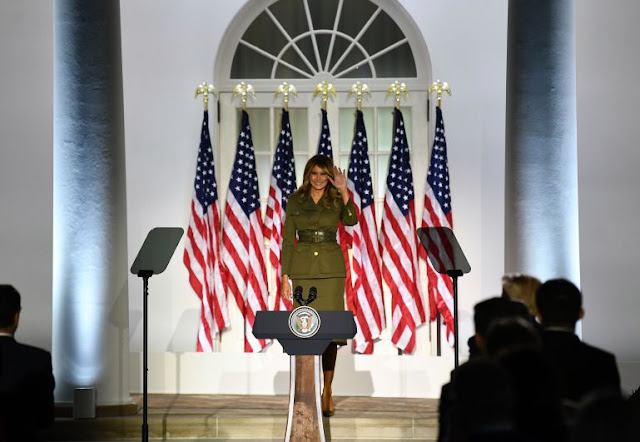 Her costume choice spoke volumes over her scripted speech. Not all communication is verbal as noted in Bethan Holt's piece "Battle-ready:  What's the Meaning Behind Melania Trump's Military Jacket." Considering that McQueen's earliest collections earned him a reputation for controversy and shock tactics perhaps the decision to go with a McQueen military jacket for this event shouldn't have surprised anyone.
All this military costume dressing makes me want to sew a white pants suit. Or at least something more cheerful as the state of the world makes me shake my head at times. 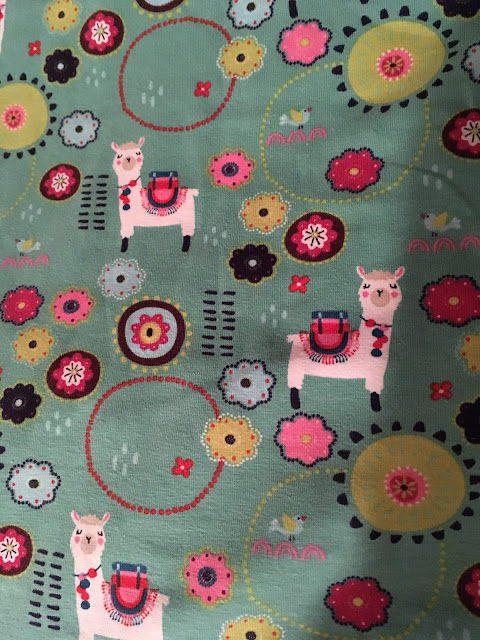 It might be time to break out Butterick 5898 and a lama print to create a wrap dress. I could really use something cheerful to wrap myself in just about now. Or it might be a t-shirt, pajamas?  I still have some time to decide as I get to work on more face masks.
Well, that's all in sewing news today.
Stay Safe and Happy Sewing!
at August 27, 2020 1 comment:

When It's Not in the Budget: Night Splint

Sewing this summer certainly has focused, more than anything else, on pandemic sewing:  face masks, scrub caps, and repeat. All this medical-inspired sewing has prepared me for another challenge. This little contraption is called a night splint or The Strassburg Sock. It's used to help people with heel pain and even though there is no defiant scientific proof that it works I'm willing to try anything at this point.  I'm just not willing to spend $60 Cdn for one sock especially when I believe that I can make one.

Why not?  The story of The Strassburg Sock started out this way.

In 1993, using a tube sock, a piece of material, and my wife's sewing machine, late one night I devised a crude device to hold my foot in position while sleeping. The next morning I felt a significant reduction of pain as I took those first steps out of bed.

If it could work for the creator of The Strassburg Sock, I thought I might be able to save myself some cash. 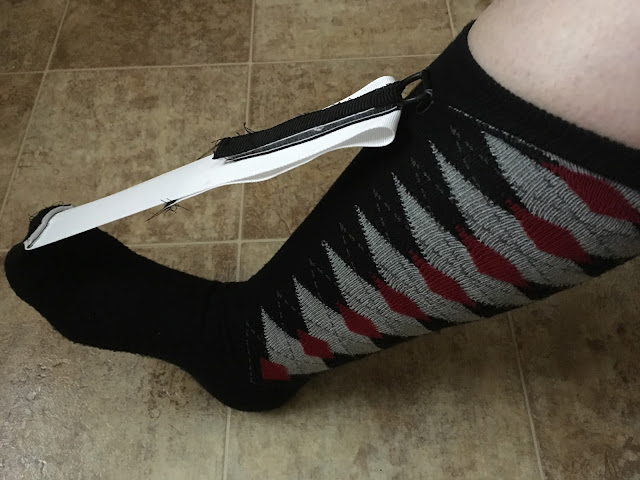 I think this might actually work. I'll be testing it out tonight.

Shopping for lining fabric last weekend did not work out.  The line up to get into the store was insane and I didn't have the luxury of ...